I’ve been trying my best to follow the drama related to BSV and script size bickering. While some of this goes over my head in a deep technical sense, or why there is drama at all to the supposedly scaleable chain, I’d like to point out a tweet I saw that highlights a mentality that makes BSV a weaker offering in my opinion.

no need to overthink the plumbing. If you have a txn that needs to be mined, then send it straight to a miner. People have to realize that having direct access to miners running transaction processing as a business is a good thing. 'The mining network' isn't a public utility

If “the mining network” is just another kind of corporate interface, what makes it more compelling than the legacy centralized solutions? Allowing back door deals and collaboration between deep-pocket entities is a slippery slope, and matches the crony relationships cultivated with internet exchange points incentivized by net neutrality.

On enforcing small companies to follow the rules of net neutrality, while large corporate infrastructure can build their own internal ISP:

This means that Google is not a customer of an ISP. Google simply connects to these internet exchange points, and here it peers with service providers.

This way, Google has far more control over how its content is delivered to users. If Google wants to treat YouTube video packets differently than the packets transferred for uploading Google Docs files, it can.

Net Neutrality laws will not affect Google because Google does not pay transit providers to deliver content to users. It peers with them.

So why does Google itself support Net Neutrality?

Google is a huge proponent of Net Neutrality. Their website is outfitted with an uppity “We Stand Together. Support a #FreeAndOpen Internet” slogan.

However, Google is privy to the fact that smaller companies, competitors, and start-ups bereft of the resources and capital available to build a global network infrastructure and peer with providers, must instead become customers of higher tier service providers to reach end-users.

And what better way to stifle competition in the market, than have these smaller companies subject to a bevy of regulations you’re free of.
— Harry Khachatrain, The Daily Wire (link above)

I would much rather be on a blockchain that is free of back-door deals and is instead completely moderated by the underlying protocol. Allowing these miners to pick and chose a service, and having large hash pools that create their own rules, is to create a network that acts on the principle of net neutrality. Boomer Calvin epitomizes this idiocy quite clearly: 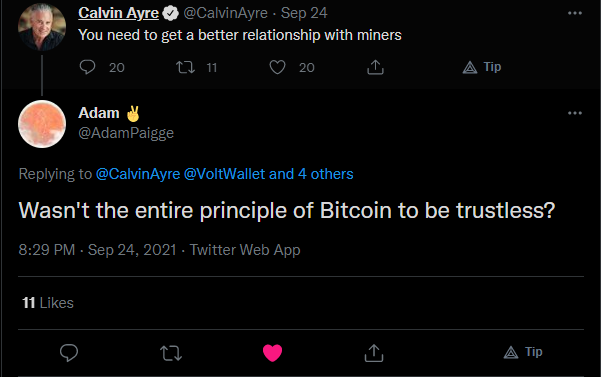 “Rules for thee but not for me.” Framing the mining network as “… [not] a public utility” falsely dichotomizes a blockchain that is beneficial for either corporate entities OR individuals. It is just as ridiculous as saying “the blockchain is not a private corporation.” The best solution is beneficial for both of them.