This is an article I wrote back in 2018 but that is appearing today more relevant than ever so I am revisting and updating it: 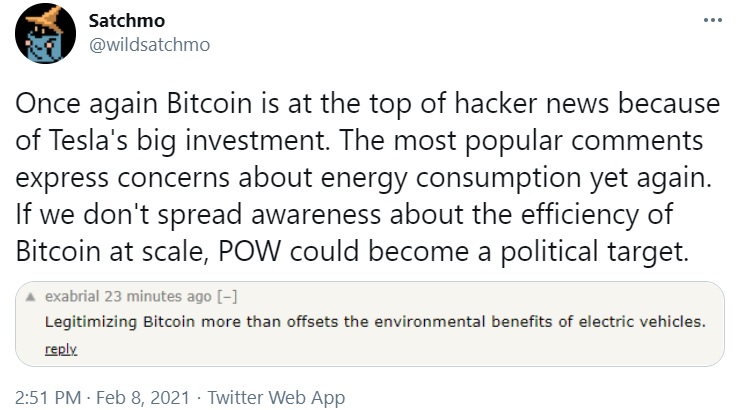 So you learned that Bitcoin uses Proof-of-Work (POW) ?

And you understand that this is good because it forces miners to reinvest into the system but also uses a ton of electricity. You might be wondering:

Why is the requirement to reinvest a good thing? If we can get a secure blockchain that doesn’t need to burn a ton of electricity, I’m all in.

And the answer is a thing of beauty to me: because in nature, not evolving is dying. The fact that everything is always changing is the only thing that doesn’t change.

Bitcoin does not burn a ton of electricity for nothing, that’s a lie but I can see why you think that. Ready to change your mind ? here we go: everytime you increase the blocksize, bitcoin becomes X times more efficient in electricity.

Today (early 2021), Bitcoin has been seen processing a 369MB block (compared to BTC’s blocksize limit of 1MB) using less than 1% of the hashpower, so can you imagine how much more efficient that makes it ?

And that will increase even more in the coming years as miners scale their infrastructure and make software improvements in the goal to earn more from processing more fees from more transactions. There is a team dedicated to doing just that which reached blocks of 2.9Gb on a test network, that’s potentially 29,000,000% more energy efficient than BTC using today’s hashrates.

Bitcoin is a data processing network

The energy efficiency of the network is reflected in the network fees.
Basically, low fees means the network is very efficient. But we need to take into account that it is a benefits/costs ratio. Bitcoin is a data processing network, where the data is in the form of transactions, so the benefits are among other things: the security of the network and the amount and size of the transactions being processed.

That is why energy efficiency increases when blocksize increases, and it should never have come up as a concern if the blocksize had been increased in time, it is only a consequence of preventing scaling. Even Satoshi back in 2010 was explaining how Bitcoin should plan to increase the block size using an example that would have increased the block size only a few months later.

The cycle of POW

The best thing in all of this is that because proof-of-work forces miners to reinvest in their hardware, it creates a self-reinforcing cycle:

As Bitcoin proves that it is the most secure and scalable network in the world, more people start to use it, which drives the number of transactions higher, which leads to a blocksize increase, which makes bitcoin more energy efficient.

The more I understand it, the more I realize the beauty and genius of it.

The creator of Bitcoin was actually asked about Bitcoin contributing to climate change in a live interview, and wrote about it too. Find the transcript of his answer, a link to the full video interview and many other links to all the sources used in this article behind the paywall, as a way to support my work, thank you!