How ya’ going? I’ve taken a break from drinking and alcohol for almost three months now. Yesterday, I engaged in moderate drinking since establishing the break. I quickly came to realize the benefits no longer warrant occasional use, nor do they outweigh the negative effects.

My decision to abstain from alcohol arose from personal curiosity, health/lifestyle experimentation and the acknowledgment of reasons behind why it is I engage in the behaviour. I began this goal the day before September, just as the Bitpost daily-writing challenge started. By the way, daily writing helped tremendously in sticking to my goal throughout the months. It was also a useful tool for referencing and tracking my thoughts, growth and development.

One observation I’ve found throughout the months is how prevalent alcohol use is within society. Now, this isn’t hard to see or nothing new. Although, after making the conscious decision of abstaining – it is difficult to not see subtle alcohol promotion everywhere. It’s like chucking on the sunglasses from They Live…

…You notice its promotion and ingrained belonging in places you’d least expect. In front of children/family locations and events, advertising, movies, music, work culture, conversations. It is Huxley’s Soma of our modern epoch. The laissez-faire nature of the whole thing. Kids giving you trouble after school? Unwind with wine time. Tough day at work, mate? Have a beer. TGIF! Party time. ‘I need a bloody drink’.

It was an astonishing thought to see how many people indeed escape from their stressors through the mesmerizing promises of alcohol. Again, this is nothing new. I’m just pointing out how much you will see its grasp on humanity after taking the road less traveled. Smarter people than I can explain the hedonistic, escapist, depraved world we are in. None the less, the mere amplification in this observation came to me as shock. I don’t care if others drink, but I ask myself whether it is entirely on their own accord? We’ve been conditioned well, and the grip is tight.

Like many cultures around the world, alcohol in Australia is heavily entrenched within our upbringing and life journey. Binging and habitual drinking was commonplace from my early teenage years to my now young adult life.

As such, I’ve never really been far from a drinking-related party, event or excuse since childhood. Admittedly, such a long-term habit did occasionally manifest behaviours reminiscent of early dependency and abuse.

Therefore, taking a quarter of the year to recalibrate and adopt novel perceptions towards my alcohol intake has been eye opening, to say the least. My relationship with the substance has changed drastically, hopefully indefinitely. 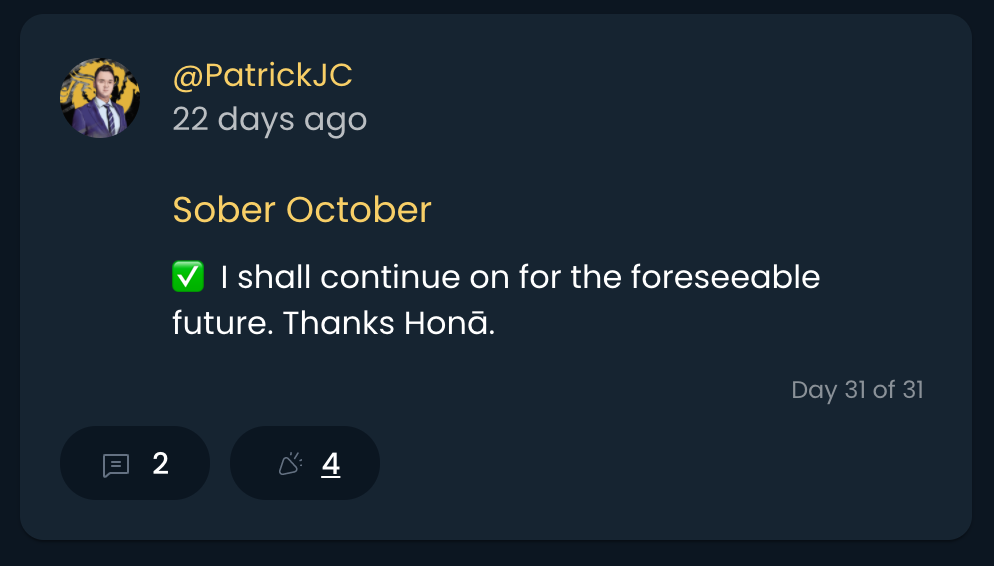 What Have I Noticed?

Some major changes I have noticed personally throughout the past 80+ days of sobriety:

Even a few days after a party or event, I still succumb to the significant blows of a hangover. What happens when you take this ritual of binging on weekends (even some days in between) and place it on repeat? Your brain will remain in a perpetual cycle of heavy fog.

Memory-retaining difficulty, unclear thoughts, consistent headaches. You must burn extra mental energy to maintain focus through the hazy fog. This is simply not living, and exhaustive on the body and soul. A month off and the fog cleared entirely. I could see and think with clarity for the first time in a long time.

With extra mental energy, I was able to address small anxieties that otherwise would have compounded into significant stress. It feels as if brain function is no longer working at power-saving capacity. I’m able to overclock mental effort, and still have energy to workout at the end of the day.

During the last thirty days, I have lost my two dear grandparents. I can safely say if I was engaged in drinking during this time, I would not have handled grief the way I did. The emotions I’ve felt over the past few weeks has been amplified like nothing I’ve felt before. This grew to the extent of physical pain and mourning on some days. However, such an amplification also paved way for healing and purging of repressed anger and sadness.

Instead of drowning the emotional response through escapist means, I embraced it head-on. It delivered me closer to those around me and delivered me close to my true inner self. This was observed in many circumstances and social interactions. Empathetic responses are heightened, I felt human again to be present and aware of one’s feelings.

After clearing the fog and tackling rough emotions with precision and clarity, you are left with free space and time to engage with your desires, motivations and everyday schedule. I’ve developed a burning desire to begin achieving all the things I want in life.

My creativity has skyrocketed, and I have a concise mind map in how I want to go about creative projects. Alcohol sucks this type of motivation from you, especially in the long-term. The key to a happy life is to seek, find and fulfil meaning to said life. Wherever or whatever that meaning is, it certainly won’t be obtained at the bottom of a bottle.

I dunno’, if you have read this far, and it resonated with you… Then why not give it a crack, at least as an experiment for yourself? My relationship and stance on alcohol has changed for the better. I hope to grow and develop as a healthier adult by significantly decreasing alcohol use. Perhaps eradicating it entirely.

If you need further motivation or inspiration, I suggest checking out the sub-Reddit /stopdrinking. Some great content on there that motivated me to dodge the temptations and such.

Like everything perhaps, booze can be okay in moderation. Though, it is important to know what your moderation is, especially if you are noticing it as a crutch, tool or escape mechanism. As someone once stated: ‘’sobriety delivers everything alcohol promised.’’

Anyway, a very lazy Sunday to sit at home and recharge. I hope you are enjoying your weekend. Here’s a melancholic tune for the quiet evening ahead:

DISCLAIMER: This post was written on Sunday the 21st of November. It was posted to Bitpost the day after due to site technical issues.