Metadesk Agency first showed up on 4th April 2021 on Twetch with the creation of the account number /u/40000. Given the specific number, it looked like the Twetch team had either given it to Metadesk or Metadesk had bought that number from Twetch.

Metadesk introduced themselves on Twetch as the “a new marketing agency that believes BSV apps are the foundational block of the future.”

Digging further into Lex, I found his LinkedIn profile from his full name, Alexandru Cristian Matesan. He looks to be in his mid-20s and had some early success with viral meme marketing - playing a key role in the “Squatting Slavs” meme where he grew the Facebook group to 1.25million followers.

On his LinkedIn page it also says that he has worked for Twetch since March 2020, as their “Viral Marketing Consultant & Memetics Engineer”.

It appears a lot of the memes posted on Twetch’s social media accounts might actually be created by Lex. I believe this recent video meme that was very popular in the BSV space was created by Lex. The Frog has also called Metadesk Agency as one of the best start ups in the space right now. 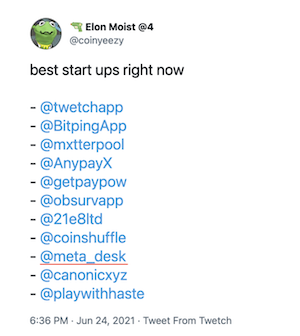 On 15th April 2021, MTD tokens were minted with a total supply of 10,000. A giveaway was held on Twetch for 777 MTD tokens to anyone who liked and followed. A day later another 333 MTD tokens were given away to anyone who made Metadesk memes. The post got quite a lot of engagement and MTD today has close to 100 holders.

Current price of MTD is 0.025 BSV. In the first week or so since the announcement it had a few sales between 0.009-0.012 BSV. There was also a landing page website that looked pretty polished and professional.

Given that the announcement gave zero details about what the MTD token is about - and there is still today not much information on it, it was interesting to see some volume creep in.

It’s possible that insiders close to Lex are buying up some MTDs knowing what Lex is building. Or speculators are just betting that MTD might be worth a bet, given the polished website and background of Lex with viral marketing.

On 2nd July 2021 Metadesk announced the Metablock NFT. The NFT has four functions:

As specific use cases for MTD tokens are not even public info yet we might see MTD price appreciate more as announcements come out on what it can be used for. Right now it looks like MTD tokens will have a similar usecase to Metablock NFTs, except as a more granular service. I.e. Metablock NFT = a whole package of 42 God-tier memes, whereas with MTD you could buy just 1 God-tier meme.

At current prices of 0.02 BSV, that is a market cap of $24,000 with BSV at $120 today. Plus the Metablock NFT market cap of $10,900 gives a total mcap of $34,900 for the two tokens. For comparison Numptycoins are at a market cap of $169,000 and SHUA is at $355,000. Does Metadesk Agency already have paying clients like Twetch or others in the space, and will they need to buy Metablock NFTs or MTD in order to receive the meme marketing services?

The Value of Memes

Given the meteorite rise of meme coins like DOGE and SHIBU, memes certainly appear to have a lot of value. With Lex’s history of growing the Squatting Slavs meme it’d be interesting to see whether that is something he can replicate or if that was a one-off lucky campaign that went viral.

There’s no doubt if this is something Lex has honed down to a replicable method that Metadesk Agency will be able to earn a lot of revenue from their clients.