On 27th April 2021, RelayX gave 30 minutes notice that the “first ever user created NFT to sell on RelayX.com” was launching. Starting price was 0.03 BSV (~$9) with 100 individually numbered NFTs for sale.

PewPewRelayX was the first of the series created by @artonchain, who on 23rd Feb 2021 was named by Jack Liu as one of his top 5 entrepreneurs. Artonchain has also done design work for Zatoshi, MirrorBSV and a few other projects within the BSV space.

All 100 PewPewRelayX NFTs were sold out at 0.03 BSV within ten minutes of launching. After that a secondary market organically started, with initial prices at around 0.18 BSV. An hour or two later the price had jumped to over 1 BSV - 33x the initial price. Price continued higher up to a peak of ~4.5 BSV where it stayed for a day or so before correcting down.

Current price as of this post is 0.98 BSV for PewPewRelayX - a significant drop from the ATH but still 32x higher than the initial listed price of 0.03 BSV.

These were launched on 30th April, again with only 30 minutes warning. This time the launch was more favourable for those in US timezones. Price was 0.03 BSV once more for 100 NFTs. The website crashed as people got FOMO to try and nab one of the NFTs.

As people knew how to price these better, prices went from 0.03 BSV straight to 1 BSV - rather than before with the PewPewRelayX where price organically moved upwards as price discovery occurred. Price then trended downwards to 0.49 BSV where it currently trades.

The PewPewStreamanity generated 2.43 BSV in sales - equal to 81 NFTs sold. It appears 19 NFTs were given to Streamanity as their cut for using their brand. This does not appear to be the case with the PewPewRelayX.

PewPewTwetch was the third in the series and will be the last one until the NFT minter is publicly released. They were listed for sale on 7th May at a price of 0.1 BSV instead of 0.03 BSV. Even with the higher price, these still sold out within minutes. And the website crashed again too.

Price action went as high as 1.8 BSV, even 2 BSV if I recall correctly, before correcting down to the current price of 0.59 BSV.

There was some confusion as one of the founders of Twetch made a tweet asking for his profit share - seemingly unaware that his brand was going to be used in this NFT. EDIT: Artonchain reached out after this was posted to say permission was sought and granted by Twetch before launch. 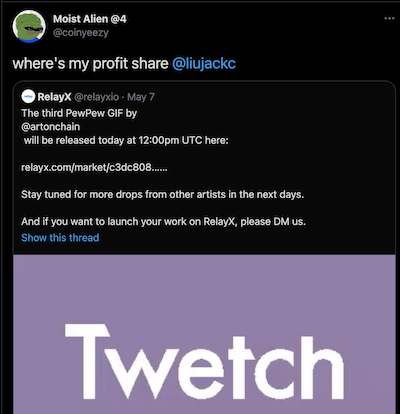 As NFTs are tokens built on Bitcoin, automatic revenue share is a feature that can be easily implemented. It is already live on platforms like Streamanity, so RelayX having a revenue share for token sales would be a good fit.

Thoughts on the Future of PewPew NFTs

As @artonchain has launched 3 PewPew NFTs so far, will more be launched? If more are launched, will this add value to the existing PewPews or reduce their value?

What happens if a whole different set of NFT artwork gets launched by @artonchain? The more NFTs are launched - by @artonchain and by everyone in the ecosystem itself, the more competition there is. So what will end up being the factors that differentiate NFTs from each other?

For @artonchain, my guess would be the proof of work s/he continues to engage in and display. As well as his/her general perceived social capital. Does @artonchain being anon play a positive or negative factor in pricing these PewPews?

The other factor in pricing these PewPews is whether the predictions become true or not. If RelayX really does flip Binance, if Streamanity becomes more popular than YouTube, or if Twetch gets more users than Twitter - then these PewPew NFTs could really become embedded in Bitcoin’s timeline and might even be museum pieces of the future.

Of course there may be other NFT artwork that play on this same prediction - perhaps even done in a way that is seen as higher quality. But the title of first NFT on RelayX will still hold and likely have merit. Though in a world of millions or billions of tokens this is no guarantee.

There has been no comment on whether @artonchain will bring PewPew NFTs any form of utility besides their artistic value and future prediction. But given they are NFTs - there may exist easier tools in the future to bring value to these NFTs. For example as an entrance ticket to a digital gallery hosted by @artonchain. Or offering a discount to holders of PewPew for his/her design work.